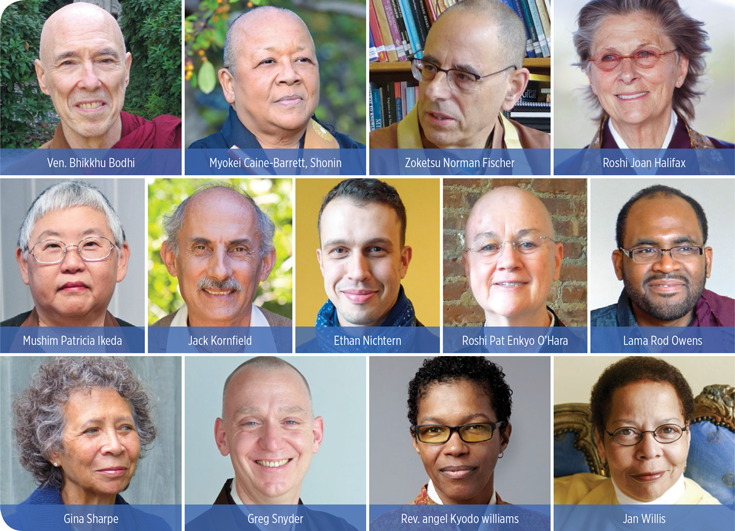 Lion’s Roar: ‘Stand Against Suffering: An Unprecedented Call to Action by Buddhist Teachers’

“Thirteen leading Buddhist teachers, joined by more than 100 additional signatories, call on Buddhists and all people of faith to take a stand against policies of the new administration that will create suffering for the most vulnerable in society.

Buddhism does not align itself with any party or ideology. But when great suffering is at stake, Buddhists must take a stand against it, with loving-kindness, wisdom, calm minds, and courage. We hear the cries of a nation whose democracy and social fabric are at risk. We join in solidarity with many others who are also hearing these cries, knowing that together we can be a remarkable force for transformation and liberation. […] Facing the reality of this suffering, we remember that peacefulness does not mean passiveness and nonattachment does not mean nonengagement.”

“Today, we ask ourselves: What does it mean to be Kwan Yin in the modern world? What does it mean to be a bodhisattva-citizen, someone who is willing to engage with society to help protect and awaken others? […] The wisdom teaching of inter-dependence is the bodhisattva-citizen’s guide to the web of causes and conditions that create suffering. While Buddhism has traditionally emphasized the personal causes of suffering, today we also discern how the three poisons of greed, aggression, and indifference operate through political, economic, and social systems to cause suffering on a vast scale. While continuing to work with ego and the three poisons in our personal practice, the insight of interdependence calls us to address the societal causes of suffering as well. As we resist the heightened threat of many of the new administration’s policies, we also recognize that underrepresented and oppressed communities in the United States have long suffered from systemic greed, aggression, aversion, and indifference. […] It is because we and others are not separate that we must act.

Whatever our political perspective, now is the season to stand up for what matters. To stand against hate. To stand for respect. To stand for protection of the vulnerable. To care for the earth. We can see clearly the work ahead of us. It is the work of love and wisdom in the face of racism, gender- and sexual orientation-based violence, xenophobia, economic injustice, war, and environmental degradation. We have to work together to shift the tide toward what will benefit our children, the natural world, and the future. […]

For now, we prepare to face challenging and stressful times. To prevail, we must hold fast to our timeless ideals of wisdom, love, compassion, and justice. We must maintain our faith that, while ignorance and hatred may at times be dominant, through concerted action patiently pursued we can create a society based on justice, love, and human unity.

More than ever, we have to be compassionate, brave, and engaged bodhisattvas. Like Kwan Yin, we hear the cries of a suffering world and, with wisdom and love, we respond.”