Born in Paris [1923], but daughter of a sailor (and sister of the solo yachtsman of the same name), she spent most of her childhood in Le Croisic, and her name places her origins in the seafaring community. The sea is always present, transparent, somewhere behind even her least figurative paintings.
Those few women painters who can be counted in each generation may find it hard to make their painting felt, but rare indeed are painters [of either sex] who have been introduced by Andre Breton, as was the case for Yahne le Toumelin. Nor are there many who have mastered as she has a technique apparently mid-way between informal and “dripping” to the point of making it recreate every abysmal depth or cosmic infinitude.

We may add that since 1968 Yahne le Toumelin has joined a Tibetan monastery, thus completing the spiritual portrait of a painter of whom Andre Breton wrote, as early as 1957: “The success of a work depends on the interior ‘state’ (assuming the balance to be at the highest degree of tension towards wisdom) of its creator”. – rireduciel.com

On the picture: Yahne le Toumelin and one of her two siblings: Matthieu Ricard, ‘happiest man in the world‘ 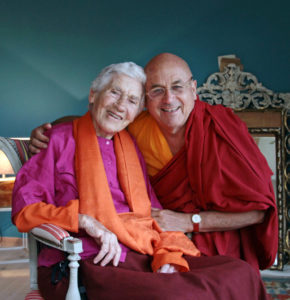 Below poems found on ‘rireduciel.com’ written by her children about their mother’s work: