Jetsunma Tenzin Palmo became famous worldwide through Vicki Mackenzie’s book Cave in the Snow that chronicled Tenzin Palmo’s quest to attain realization in a female body. Born as a fishmonger’s daughter in London, Tenzin Palmo has set an unprecedented example of following in the footsteps of the most dedicated Tibetan yogis by spending twelve years in solitary retreat in a cave in Ladakh, immersing herself so deeply in this tradition that she has earned the unabashed respect of traditional Asian teachers and modern Westerners alike. She is the most senior Western Tibetan Buddhist nun alive. On July 24, 2014, Jetsunma celebrated the 50th anniversary of her ordination—a truly remarkable achievement!

She is currently realizing her heartfelt aspiration: she has established a nunnery solely dedicated to offering the nuns optimal opportunities to study, debate, and meditate—a privilege usually reserved for monks. “Even Tibetan masters are beginning to realize, if you want real devotion and focus, you have to look to the nuns,” Tenzin Palmo says proudly. “I tell my girls, now you are given all the opportunities, you can accomplish whatever you want!” – dakinipower.com 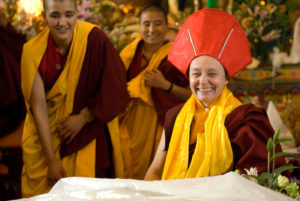 In February 2008 Tenzin Palmo was given the rare title of Jetsunma, which means Venerable Master, by His Holiness the 12th Gyalwang Drukpa, Head of the Drukpa Kagyu lineage in recognition of her spiritual achievements as a nun and her efforts in promoting the status of female practitioners in Tibetan Buddhism. – tenzinpalmo.com