Zenkei Blanche Hartman Roshi (1926–2016) was a Soto Zen teacher in the lineage of Suzuki Roshi and a revered elder figure in American Zen. She spent two terms as abbot of the San Francisco Zen Center and was in fact the first woman abbot of a Zen center in America. She’s an expert in rakusu-sewing (those bib-like things you see Zen Practitioners wear that represent the Buddha’s robe), and she’s been particularly known for her attention to women’s issues in Buddhism and Zen. – shambala.com 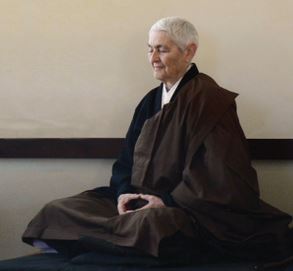 Blanche studied Nyoho-e, the practice of sewing Zen ceremonial robes, with Kasai Joshin Sensei, in the lineage of Sawaki Kodo Roshi. She taught this unique form of Zen practice to hundreds of students at Zen Center, and played an important role in establishing the practice in North America. – Rebecca Hartman Huenink on SFCZ.org