“Shunryu Suzuki-roshi was born in Japan in 1904. He grew up to become a respected teacher in the Soto Zen lineage and the abbot of his father’s Buddhist temple. But in 1959, at age fifty-four, he applied for and received a temporary position to minister to the Japanese-American community in San Francisco’s Japan Town.

Suzuki-roshi discovered the seriousness and quality of ‘beginner’s mind’of Americans interested in Zen. The growing number of American Zen students led to the creation of the San Francisco Zen Center. Shunryu Suzuki-roshiIn 1967 Suzuki-roshi and his students established the Tassajara Zen Mountain Center in the mountains of Big Sur. This was the first Buddhist training monastery to be built outside Asia.

Suzuki-roshi died in 1971. Today there are over 60 zen centers and groups in North America continuing the Shunryu Suzuki-roshi lineage of Soto Zen Buddhism. Many of his talks have been collected in the books Zen Mind, Beginner’s Mind, Not Always So, and Branching Streams Flow in the Darkness: Zen Talks on the Sandokai. 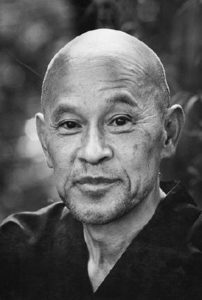