“Nishida Kitarō was the most significant and influential Japanese philosopher of the twentieth-century. His work is pathbreaking in several respects: it established in Japan the creative discipline of philosophy as practiced in Europe and the Americas; it enriched that discipline by infusing Anglo-European philosophy with Asian sources of thought; it provided a new basis for philosophical treatments of East Asian Buddhist thought; and it produced novel theories of self and world with rich implications for contemporary philosophizing. Nishida’s work is also frustrating for its repetitive and often obscure style, exceedingly abstract formulations, and detailed but frequently dead-end investigations. Nishida once said of his work, “I have always been a miner of ore; I have never managed to refine it” (Nishida 1958, Preface). … His style is akin to the manner in which one repeatedly practices a traditional Japanese art like calligraphy, poetry or even Zen mediation: working at a particular activity or expression, getting better and better at it without erasing one’s previous attempts. ” – John C. Maraldo on plato.stanford.edu 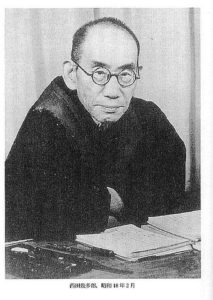 Nishida was presented with a new, unique opportunity to contemplate Eastern philosophical issues in the fresh light that Western philosophy shone on them. Nishida’s original and creative philosophy, incorporating ideas of Zen and Western philosophy, was aimed at bringing the East and West closer. Throughout his lifetime, Nishida published a number of books and essays including An Inquiry into the Good and “The Logic of the Place of Nothingness and the Religious Worldview.” Taken as a whole, Nishida’s life work was the foundation for the Kyoto School of philosophy and the inspiration for the original thinking of his disciples.

The most famous concept in Nishida’s philosophy is the logic of basho (Japanese: 場所; usually translated as “place” or “topos”), a non-dualistic concrete logic, meant to overcome the inadequacy of the subject–object distinction essential to the subject logic of Aristotle and the predicate logic of Immanuel Kant, through the affirmation of what he calls the “absolutely contradictory self-identity”, a dynamic tension of opposites that, unlike the dialectical logic of Georg Wilhelm Friedrich Hegel, does not resolve in a synthesis. Rather, it defines its proper subject by maintaining the tension between affirmation and negation as opposite poles or perspectives.

When David A. Dilworth wrote about Nishida’s work, he did not mention the debut book in his useful classification. In his book Zen no kenkyū (An Inquiry into the Good), Nishida writes about experience, reality, good and religion. He argues that the most profound form of experience is the pure experience. Nishida analyzes the thought, the will, the intellectual intuition and the pure experience among them.[3] According to Nishida’s vision as well as to the essence of Asian wisdom, one craves harmony in experience, for unity.[4]– wikipedia.org