Zen Master Thich Nhat Hanh is a global spiritual leader, poet and peace activist, revered throughout the world for his powerful teachings and bestselling writings on mindfulness and peace.

His key teaching is that, through mindfulness, we can learn to live happily in the present moment—the only way to truly develop peace, both in one’s self and in the world.

Born in central Vietnam in 1926, Thich Nhat Hanh entered Tu Hieu Temple, in Hue city, as a novice monk at the age of sixteen. As a young bhikshu in the early 1950s he was actively engaged in the movement to renew Vietnamese Buddhism. He was one of the first bhikshus to study a secular subject at university in Saigon, and one of the first six monks to ride a bicycle.

When war came to Vietnam, monks and nuns were confronted with the question of whether to adhere to the contemplative life and stay meditating in the monasteries, or to help those around them suffering under the bombings and turmoil of war. Thich Nhat Hanh was one of those who chose to do both, and in doing so founded the Engaged Buddhism movement, coining the term in his book Vietnam: Lotus in a Sea of Fire.

His life has since been dedicated to the work of inner transformation for the benefit of individuals and society.

On May 1st, 1966 at Tu Hieu Temple, Thich Nhat Hanh received the ‘lamp transmission’ from Master Chan That, becoming a dharma teacher of the Lieu Quan Dharma Line in the 42nd generation of the Lam Te Dhyana school (“Lin Chi Chan” in Chinese or “Rinzai Zen” in Japanese).

A few months later he travelled once more to the U.S. and Europe to make the case for peace and to call for an end to hostilities in Vietnam. It was during this 1966 trip that he first met Dr Martin Luther King Jr., who nominated him for the Nobel Peace Prize in 1967. Yet as a result of this mission both North and South Vietnam denied him the right to return to Vietnam, and he began a long exile of 39 years.

Thich Nhat Hanh continued to travel widely, spreading the message of peace and brotherhood, lobbying Western leaders to end the Vietnam War, and leading the Buddhist delegation to the Paris Peace Talks in 1969.

He also continued to teach, lecture and write on the art of mindfulness and ‘living peace’, and in the early 1970s was a lecturer and researcher in Buddhism at the University of Sorbonne, Paris. In 1975 he established the Sweet Potato community near Paris, and in 1982 they moved to a much larger site in the south west of France, soon to be known as “Plum Village”.

Under Thich Nhat Hanh’s spiritual leadership Plum Village has grown from a small rural farmstead to what is now the West’s largest and most active Buddhist monastery, with over 200 resident monastics and up to 8,000 visitors every year, who come from around the world to learn “the art of mindful living.”

Plum Village welcomes people of all ages, backgrounds and faiths at retreats where they can learn practices such as walking meditation, sitting meditation, eating meditation, total relaxation, working meditation and stopping, smiling, and breathing mindfully. These are all ancient Buddhist practices, the essence of which Thich Nhat Hanh has simplified and developed to be easily and powerfully applied to the challenges and difficulties of our times.

In recent years Thich Nhat Hanh has led events for US Congressmen and -women, and for parliamentarians in the UK, Ireland, India and Thailand. He has addressed UNESCO in Paris, calling for specific steps to reverse the cycle of violence, war and global warming, as well as the World Parliament of Religions in Melbourne. On a visit to the US in 2013 he led high-profile mindfulness events at Google, The World Bank and the Harvard School of Medicine.

On 11 November 2014, a month after his 89th birthday, and following several months of rapidly declining health, Thich Nhat Hanh suffered a severe stroke. In January 2016, after over a year of intensive rehabilitation, Thich Nhat Hanh returned to his hermitage at Plum Village. Although he is still unable to speak, and is mostly paralysed on the right side, he continues to offer his peaceful, serene and valiant presence to his community in Plum Village, participating in walking meditations, mindful meals, sitting meditations, celebrations and ceremonies as far as his health allows. – plumvillage.org 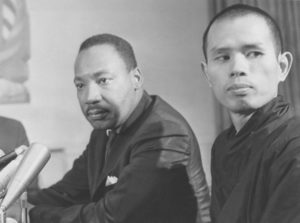