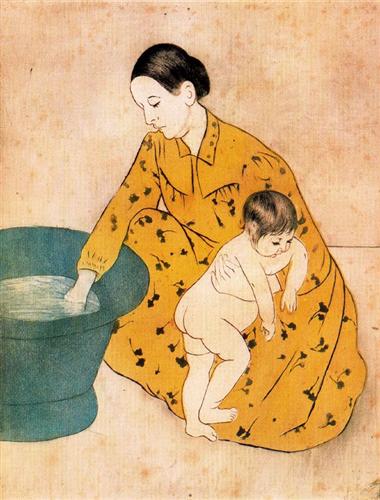 “The religion scholar Rita Gross makes the point that most domestic acts are revered in Zen monasteries. The ordinary is made a point of reverence and attention […] There is nothing sacred about sweeping the walk of a monastery, and nothing profane about sweeping the kitchen at home.

But in a vast literature and endless works of art, the monk sweeping the stone walk is emblematic of a high pursuit, cast in an entirely different light than the woman sweeping the kitchen while her toddler eats breakfast. Which act is more difficult to do well, to do with mindfulness and selfless attention? What exactly makes them seem so different?

Monastic practice reveres domestic acts with one exception: monks don’t do child care. Again, I [Sallie Tisdale] am indebted to Rita Gross for making the blunt suggestion that day care would in fact be a sensible business for a Zen monastery. Responsibility for child care keeps many committed Buddhist women out of monasteries, even for brief retreats. Imagine if a woman could go to the cloistered temple and be free for eight hours of the day to do her zazen, her silent work, her study and her contemplation, while a monk cared for her baby. Cleaning toilets is considered excellent Buddhist practice. Why not diapers? Why not envision our community in these new ways? In fact, a few monasteries now have limited daycare programs.” – Sallie Tisdale