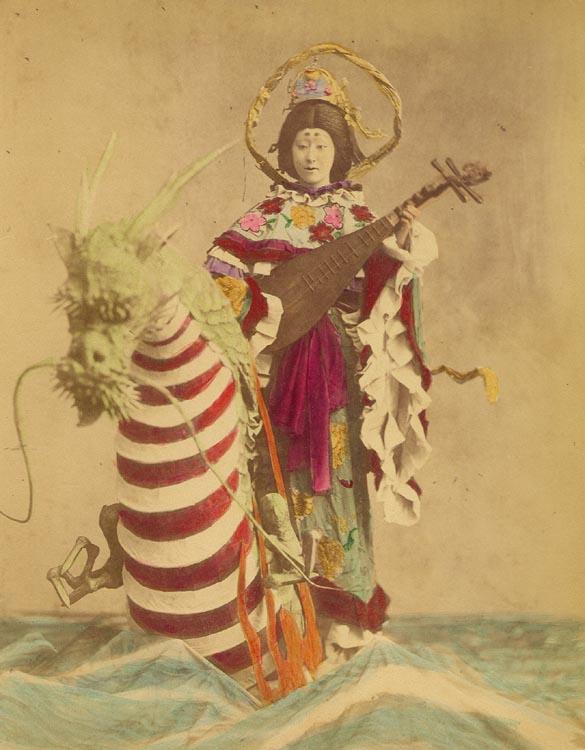 May the goddess of speech enable us to attain all possible eloquence,
she who wears on her locks a young moon,
who shines with exquisite lustre,
who sits reclined on a white lotus,
and from the crimson cusp of whose hands pours,
radiance on the implements of writing, and books produced by her favour.

Benzaiten (弁才天, 弁財天) is a Japanese Buddhist goddess, who originated from the Hindu goddess Saraswati. Worship of Benzaiten arrived in Japan during the 6th through 8th centuries, mainly via the Chinese translations of the Sutra of Golden Light, which has a section devoted to her. She is also mentioned in the Lotus Sutra and often depicted holding a biwa, a traditional Japanese lute, just as Saraswati holds a veena. Benzaiten is a syncretic entity with both a Buddhist and a Shinto side.

Referred to as Sarasvatî Devî in Sanskrit (meaning “Goddess Saraswati”), Benzaiten is the goddess of everything that flows: water, time, words, speech, eloquence, music and by extension, knowledge. The original characters used to write her name read “Biancaitian” in Chinese and “Bensaiten” in Japanese (辯才天) and reflect her role as the goddess of eloquence. Because the Sutra of Golden Light promised protection of the state, in Japan she became a protector-deity, at first of the state and then of people. Lastly, she became one of the Seven Gods of Fortune (fukujin) when the Sino-Japanese characters used to write her name changed to 弁財天 (Benzaiten), emphasizing her role in bestowing monetary fortune. Sometimes she is called Benten although this name usually refers to the god Brahma. A form of her name which definitively distinguishes her as not the masculine god Brahma is Benzaitennyo (弁才天女), as the final tennyo (天女) translates as “goddess”. – wikipedia.org

Best Mother, best of Rivers, best of Goddesses, Sarasvatī, We are, as ’twere, of no repute and dear Mother, give thou us renown. – Rigveda 2.41.16

Saraswati (Sanskrit: सरस्वती, Sarasvatī) is the Hindu goddess of knowledge, music, art, wisdom and learning worshipped throughout Nepal and India. She is a part of the trinity (Tridevi) of Saraswati, Lakshmi and Parvati. All the three forms help the trinity of Brahma, Vishnu and Shiva to create, maintain and regenerate-recycle the Universe respectively.

The earliest known mention of Saraswati as a goddess is in the Rigveda. She has remained significant as a goddess from the Vedic period through modern times of Hindu traditions. … Saraswati is also worshipped outside the Indian subcontinent, in nations such as Japan, Vietnam, Indonesia and Myanmar.

The word Saraswati appears both as a reference to a river and as a significant deity in the Rigveda. In initial passages, the word refers to the Sarasvati River and is mentioned as one among several northwestern Indian rivers such as the Drishadvati. Saraswati, then, connotes a river deity. In Book 2, the Rigveda describes Saraswati as the best of mothers, of rivers, of goddesses. – wikipedia.org