“The feminine principle is a subtle energy, which has remained untapped within the psyche of both men and women. It is merged in the essence of our spiritual identity and is marked by qualities attributed to the more gentle side of the human being – care, respect, trust, patience, loyalty, love honesty, empathy, and mercy. When this principle is understood and realised, it is a force so powerful that it awakens us to new realities and realigns us to the true purpose and meaning of life. Both men and women possess this feminine principle but throughout history it has often been equated with emotion, weakness, and vulnerability and, in the context of social, economic, and political issues, flushed from the mainstream of development to a backwater and then labelled as ‘women’s issues’. The feminine principle was thereby controlled and crushed by the iron hand of patriarchal power, which almost invariably demanded nothing less than the sacrifice of intuition at the altar of rigid logic, the suppression of gentleness for the sake of brute strength, and the compliance of women with the dominance of men.

If the problems which have arisen through the suppression and control of this principle are to be corrected in a way that will last, then this must be done through a change of consciousness rather than a reversal of positions, roles: a change of consciousness which takes its birth from a base of spirituality and not from a base of sexuality. The feminine principle, this untapped subtle potential that lies at the core of our being, must now be realised to restore a balance between intellect and intuition, facts and feelings, reason and realism.” – Gayatri Naraine

END_OF_DOCUMENT_TOKEN_TO_BE_REPLACED 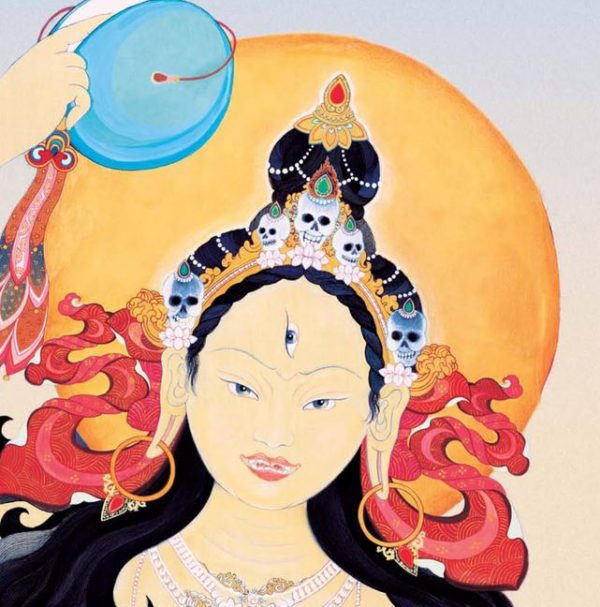 Woman is essentially wisdom,
Source of spontaneous prajna and subtle-body.
Never consider her inferior;
Strive especially to see her as Vajravarahi*