END_OF_DOCUMENT_TOKEN_TO_BE_REPLACED

Venerable Thubten Chodron is the author of Buddhism for Beginners and founding abbess of Sravasti Abbey in Washington State.  She is renowned for her extraordinary ability to present even the most profound spiritual teachings simply and directly to Western audiences. With her characteristic warmth and humor, she skilfully weaves together traditional teachings with practical advice for modern Western women and men. In Dakini Power she speaks about her upbringing as a “nice Jewish girl”, her years of exploring the counterculture of the Seventies, her prison work and her dedication to using the Buddha’s teachings on how to work with emotions in a contemporary context. She is faced with the irony that she is perceived as a  liberal in traditional Tibetan circles, while some Westerners automatically see her as part of the “hierarchical” monastic institution because of her robes. “Curiously, while women’s issues are at the forefront of discussion in Western Buddhism, once a woman becomes a monastic, she is seen as ‘conservative and traditional,’ qualities disdained by some Westerners who practice Buddhism,” Chodron comments, unfazed. “You learn to live with whatever people happen to think of you and then continue to live your life and practice the dharma.” – dakini power 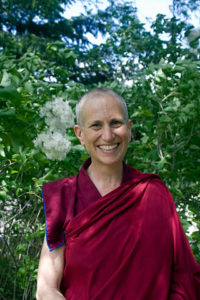 Born in Chicago in 1950, Venerable Thubten Chodron grew up near Los Angeles. She graduated with a B.A. in History from the University of California at Los Angeles in 1971. After traveling through Europe, North Africa and Asia for one and a half years, she received a teaching credential and went to the University of Southern California to do post-graduate work in Education while working as a teacher in the Los Angeles City School System.

In 1975, she attended a meditation course given by Lama Yeshe and Kyabje Lama Zopa Rinpoche, and subsequently went to Kopan, their Monastery in Nepal, to continue to study and practice Buddha’s teachings. In 1977, she received sramanerika (novice) ordination from Kyabje Ling Rinpoche, and in 1986 she received bhikshuni (full) ordination in Taiwan. …

She is active in Dharma outreach to people who are incarcerated in prisons.

Ven. Chodron emphasizes the practical application of the Buddha’s teachings in our daily lives and is especially skilled at explaining them in ways easily understood and practiced by Westerners. She is well known for her warm, humorous, and lucid teachings. She has published many books on Buddhist philosophy and meditation. – thubtenchodron.org