END_OF_DOCUMENT_TOKEN_TO_BE_REPLACED

Because of developments in transportation, we feel planet Earth is getting smaller and smaller. But where are we going in our speedy cars? We play pinball, we gamble. We move so fast simply to do wasteful things.

END_OF_DOCUMENT_TOKEN_TO_BE_REPLACED 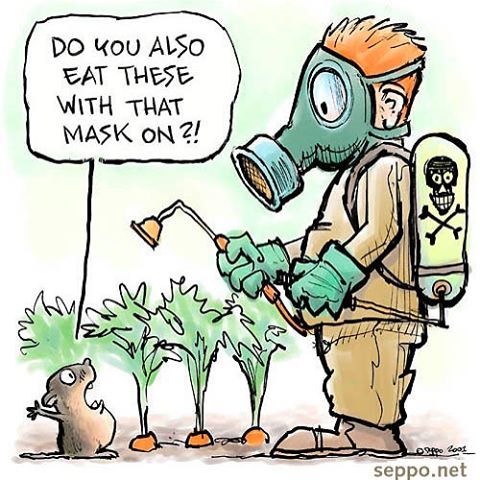 “This meeting is not only a fight against a multinational company, it is a commitment to life and freedom. It’s all about stopping the big corporations, which are colonising our food system and our agriculture by enslaving our Mother Earth for their profit. (…) It is a fight for humanity and for the future of the planet.”

The brochure ‘Ecocide – Corporations on trial’ originally published in Switzerland by the European Civic Forum is now available in English and Spanish. The first version that was available in printed version in French and German has been revised, and prefaced by Prof. Olivier de Schutter. The English and Spanish PDF version is a joint production of the European Civic Forum and the Monsanto Tribunal Foundation. It can be freely shared and printed. – en.monsantotribunal.org

Stop monster-merger BaySanto! (to: Commissioner for Competition Margrethe Vestager, European Commission)  A Bayer-Monsanto merger would be a disaster for our farmers. It will be a catastrophe for our bugs, bees and birds. We urge you to reject the merger and prevent the damage caused by these corporations. We also demand full openness about your decision making processes.

Why is this important? On October 16 we have published scientific research with our partners, showing the proposed merger should be forbidden under EU competition law. The research, done by international competition law experts from the University College London, explains how Bay-Santo would control our entire food system. They want farmers to buy all they need from one company. Starting with GMOs, seeds, and pesticides as their main products, Bay-Santo will also offer fertilizer, digital equipment, and farm machinery.

Bayer is one of the largest producers of agricultural chemicals, fertilizers, and pesticides. And Monsanto is one of the leading producers of genetically modified plants. [1] Together, these companies could have a total lockdown on what farmers put in their fields, the pesticides they use, what we buy in the shops, and ultimately put on our dinner tables. If the merger is to be successful, the two companies must gain approval of competition authorities all over the world, including from the EU. Bayer has managed to “convince” Donald Trump to back the mega-merger [2], and now there is really only one organisation that has enough clout to stop the deal – the European Union.

We know that Margrethe Vestager, Commissioner for competition informally is already negotiating with Bayer behind closed doors. If we don’t act now this mega-merger could be a done-deal. That’s why we have to tell her to reject the deal now. – WeMove.EU

END_OF_DOCUMENT_TOKEN_TO_BE_REPLACED

It’s a cold and foggy morning in Brussels. Together with 20 other activists I have been waiting for Frans Timmermans for more than an hour. The first Vice-President of the European Commission will open the EU conference on plastic strategy today. We have 600,000 signatures from all over Europe to hand over – three kilograms of paper. Will our signatures hold any weight for him? Timmermans and his staff are coming around the corner with quick steps – and his reaction leaves us almost speechless.

He is concerned about the waste of our seas: “I am your ally and I will do my best so that we can present an ambitious strategy by the end of this year”. Timmermans, the second-ranking official in the European Commission supports our campaign – this is a real breakthrough!

Are these just empty words? It does not look like it. In his opening speech at the conference, he mentions our petition right at the beginning – to the surprise of the plastics lobby. And shortly after, he posts a video of our delivery on Facebook and Twitter. EU’s First Vice-President takes the fight against plastic waste very seriously – and our Europe-wide campaign is of great help to him. 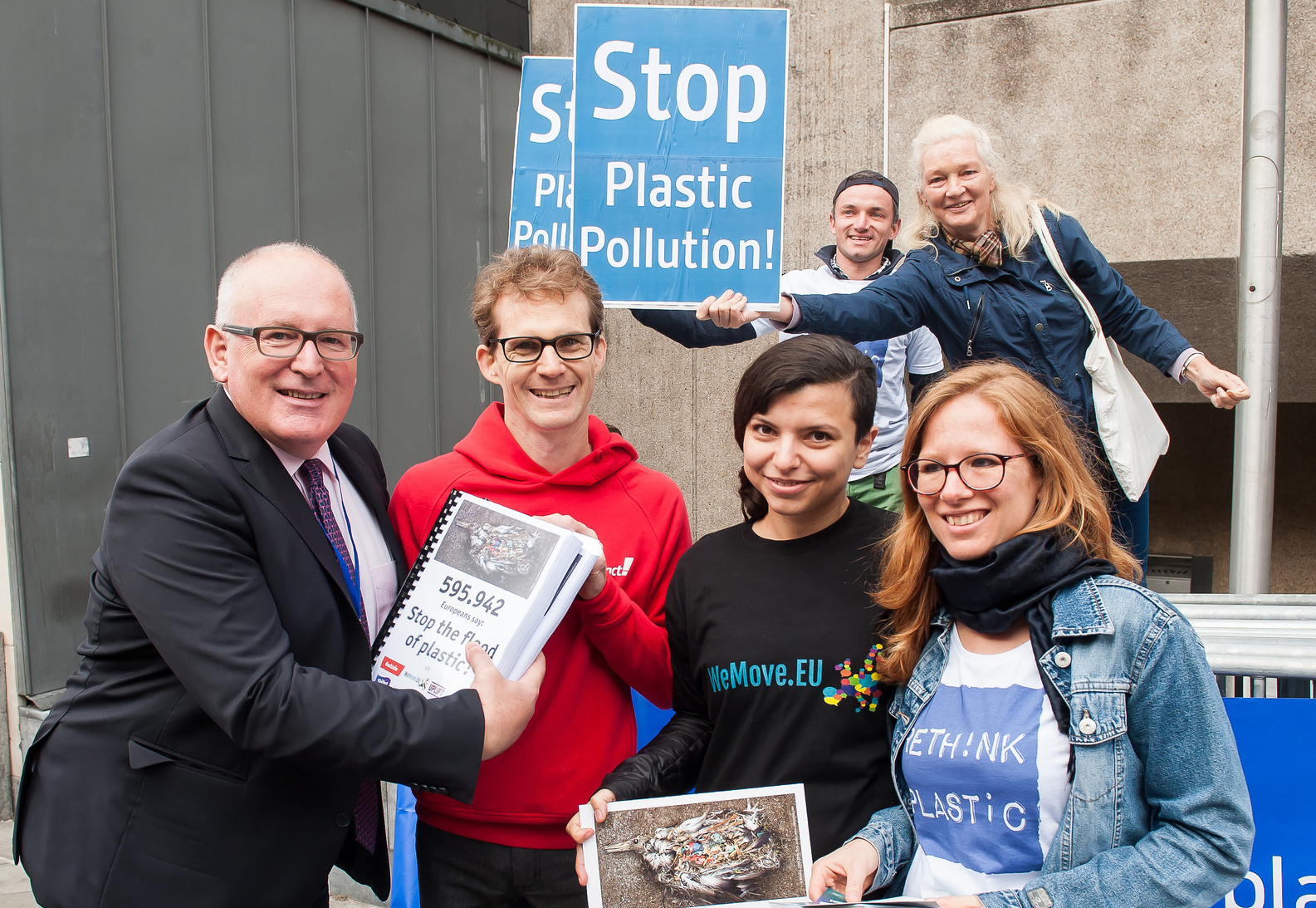 Handing over the signatures to Vice-President Timmermans with our friends from Campact and Rethink Plastic Alliance
We believe that when politicians announce ambitious plans, they deserve our praise. A wave of support on Facebook and Twitter will encourage Timmermans to follow-through on his ambitious goals and stand up to the plastic industry. He is very active on social networks, so we can be sure he will notice. Use the buttons below to show your support with a comment or “like”:

The fight is not over yet, but this is a huge step forward and we can be proud of it. …

“Science and technology alone cannot stop continuing warfare, racism, and environmental destruction. The illusion of separation that fuels global consumerism and greed, fear, and ignorance needs to be transformed by the realization of interdependence, by the illumination of wisdom and compassion. Each of us must find our own way to contribute to this with the wisdom of our practice and our own unique capacities. …

Find a way to quiet your mind and open your heart. Meditate, turn off the news, turn on Mozart, walk through the trees or the mountains, and make yourself a zone of peace and compassion. You can get swept up in a frightened, barricaded society—or you can respond calmly, with both prudent action and a fearless steady heart. Thich Nhat Hanh explains, ‘When the crowded refugee boats met with storms or pirates, if every one panicked, all would be lost. But if even one person stayed calm, it was enough. It showed the way for everyone to survive.'”

“Interest in eco-dharma – the ecological implications of Buddhist teachings – is finally growing after years of apparent indifference and little conversation about it in Buddhist sanghas. … Indifference to eco-dharma seems to be reflective of a larger problem with socially engaged Buddhism in the West. … we are getting better at pulling drowning people out of the river, but we are not much better at asking why there are so many more people caught in the river. Who or what is pushing them in upstream? When we dare to ask why so many are homeless in the wealthiest country in history, or why so many languish in prisons, we are dismissed as radicals or leftists. “These concerns,” goes the common response, “have nothing to do with Buddhism.”

Does the ecological crisis also have nothing to do with Buddhism? Or is the disconnect due to our misunderstanding of Buddhism? The philosopher Slavoj Zizek has argued that this disconnect applies generally to Western Buddhism, which “enables you to fully participate in the frantic pace of the capitalist game while sustaining the perception that you are not really in it; that you are well aware of how worthless this spectacle is; and that what really matters to you is the peace of the inner self to which you know you can always withdraw.” His point has some validity. END_OF_DOCUMENT_TOKEN_TO_BE_REPLACED 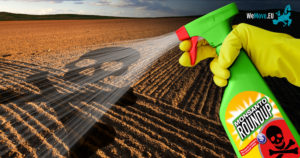